The Evolution of Outdoor Cinema

For generations, outdoor cinema has been a tradition within all walks of life. American and European families alike would all gather in the family car and ride down to the drive-in theater to see the newest movies. Outdoor cinema combines the movie-going experience with spending time outside, under the stars. From its inception over a hundred years ago to today, world populations still visit traditional movie theaters in droves. Going to the movies remains in the top 10 ideas for date nights, family outings, or fun hangouts with friends. While very different from the drive-ins of the 1950s, watching outdoor movies is gaining popularity as a fun way to have a backyard gathering of friends, a neighborhood hangout, or a large city event. The experience has changed dramatically since the outdoor cinema’s conception, but how?

The Early Days of Outdoor Entertainment Media
In 1895, with the invention of cinematography, the Lumière Brothers became the first people to enter the cinema world. The word “cinema” came from this invention, which is the word that is still used today. At those times, only films of up to one minute in length could be shown. At the beginning of the 20th century, “living photographs” could be seen in various theaters, but the first dedicated moving picture cinema was not created until 1907.

The outdoor cinema movement would soon spread from Europe to the rest of the world. Australia’s Sun Pictures is home to the oldest and longest running outdoor cinema, organizing outdoor movie events and cinema evenings since 1916. Their enduring legacy is appreciated not only by the thousands of movie fans who enjoy nights there, but also by the Guinness Book of World Records.

America and the Drive-In Phenomenon
The first ever drive-in cinema in the world was established in the United States in 1933, when the Camden Drive-in in New Jersey opened its doors to muscle cars and classic American old-timers. The 1950s were the absolute drive-in boom period in the USA. Films with stars like James Dean, featuring cheaper tickets and a privately seated atmosphere in viewers’ own cars, added to the drive-in movie industry. Not only were the Americans enjoying the drive-in cinema, but the Europeans also wanted in on the outdoor movie fun. The first European drive-in was established in Frankfurt, Germany and is still in use to this day.

The Modern Age of Outdoor Cinema
Today, people still enjoy outdoor movies, congregating in parks and city areas all over the world. With technological advancements, drive-in movies have also evolved. High-quality projectors have allowed for bigger, better, and clearer projections. LED video screens are taking outdoor movies to the next level with incredibly bright, crisp images that are so good you can even watch them in the daylight!  Movies, themselves, have also become more immersive, implementing realistic CGI and top-of-the-line cinematography techniques. Outdoor Movies have also grown into other events with big screens showing live-tv, sporting events, and concerts. Outdoor cinema is a tradition steeped in history, which appears to only be growing as technology progresses.

If you would like to learn more about the evolution of outdoor cinema or host your own outdoor movie or drive-in movie event, please get in touch with our friendly team! 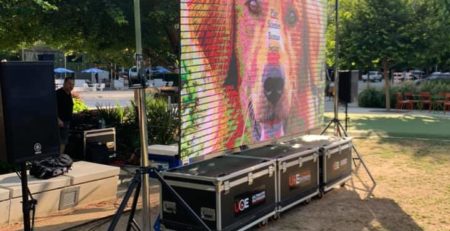 THIS Saturday we are taking over Klyde Warren Park in full force, or rather — FULL FUR!
If you are… 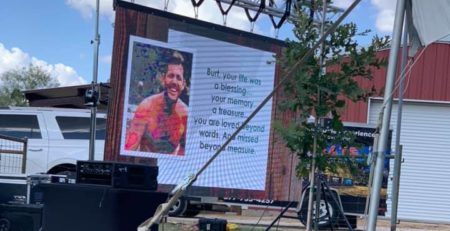 We love being part of family celebrations, even when they are celebrations of life or memorials for lost loved…